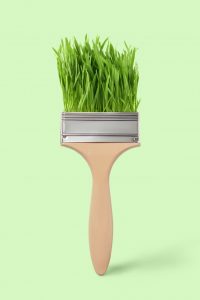 Moving into a new home always brings about a new sense of accomplishment to couples or any family as the case may be. The sense of starting a new chapter in your lives usually comes to mind and with a new house comes the idea of setting up your vicinity not only to become homelier but to also meet your taste.

How to Know if Paint is Nontoxic? You will know if paint is non-toxic if they contain low to none VOC (Volatile Organic Compounds), have minimal or no odor, or are natural paint. Examples of brands of paint that are non-toxic are Colorhouse, Safecoat, and Ecos.

Toxic paints can be really detrimental to the health of anyone and need to be properly corrected or maintained to ensure that isn’t the case. But what exactly are VOC’s and why is it bad for us?

Everything You Need to Know About Nontoxic Paint

Well, the issue isn’t where it’s been applied or in what manner as to how the paint is applied, but rather the paint itself. Traditional paints and products such as paint stripper or thinner, release volatile organic compounds (VOC) to the atmosphere as gases.

What is VOC? (Volatile Organic Compounds)

VOCs contain several chemicals such as toluene, xylene, glycol, and ethyl acetate to name a few who can hinder the overall quality of hair within an enclosed space, thereby exposing inhabitants to serious health risks. VOCs are released as a result of using paint products that contain them.

Nontoxic is somewhat farfetched when it comes to classifying paints. Paints are made from oils, and other chemicals which make them fulfill the purposes as to why they were created in the first place, these chemicals are often harmful when exposed to on the regular.

Now I am not saying you shouldn’t paint your home and stick with a bare wall of some sort here. But rather stating the facts and trying not to mislead you.

That said, nontoxicity in paints is more about the degree as opposed to completely VOC free. Even zero VOC paints do contain some amounts of toxins, but as you would guess, these toxins are less harmful to our health.

These paints are made from purely natural ingredients such as plant oils, water, plant and mineral dyes, natural minerals such as clay, and chalk. These paints often give off little to no smell or, in some cases give off pleasant fragrances depending on their composition.

Some examples of this type of paints are;

Natural paints are the safest paint to use for your home and it’s better for the environment. The only problem is that they tend to be more expensive than ordinary paint. It’s like choosing the organic version when grocery shopping, you are paying that premium price for the organic selection.

These are paints with VOC levels that fall within the range of 5 liters or less. Careful attention needs to paid these sort of paints as they are often delicate as a simple addition of colorants can bump their VOC levels to 10 liters which are above the required threshold of what a zero VOC paint should be, even though acceptable by some standards.

Manufacturers often state their paints fall within this line, but it isn’t always true.

Examples of these types of paints include:

Low VOC paints are mixed with water as the main agent as opposed to petroleum solvents, thereby making them less susceptible to releasing harmful emissions to the atmosphere.

They have much lower levels of heavy metals, formaldehyde, and all the other bad chemicals you are trying to avoid.

These types of paints include:

Remember, Low VOC paint will still have an odor when you are actively painting with it. After it dries, the smell will go away quicker versus traditional paint. Make sure you try to buy paint that contains 25-30 grams of VOC or less.

We also have an article that explains potential toxicity in water paints and how to avoid it. Go here for full details.

What the Experts Say About Toxic Paint

According to experts (JournalNow), emission often occurs in the first few days after painting is done, with some cases having these harmful chemicals being present within the region for years.

This issue is especially harmful in the case of newly born babies as their respiratory organs consume more oxygen than those of fully grown adults, thereby meaning they are more likely to be affected by the effects than adults.

Some of these harmful chemicals that get thrown into the atmosphere are known to also be some of the causes of cancer in humans and animals. Well, people can often be of the mindset that just about anything can cause cancer these days, and be a little lackadaisical about their health in general.

It is worth taking into account what was previously stated about newly born babies consuming more oxygen, which can be interpreted to them being more likely to have cancer down the stretch. No parent would want that for any child, and so it is essential to take this issue at heart and look into how to tackle it.

Are Toxic Paints Harmful to Your Health

There’s often the notion that there’s nothing as being too healthy. Well, since that is the case, and with the ever-improving standards of living and ever-increasing chances of illnesses attributed to environmental pollution, it is essential that people be more self-conscious and aware of their surroundings.

According to the journal Occupational & Environmental Medicine, a just-published study, women more exposed to paint chemicals are more likely to have a child with an autism spectrum disorder.

I am sure with this statement you must be shocked as to the lengths of how being exposed to toxic paint can reach.

Well, another study (NCIB Gov site) also states that the longer the exposure, the greater the risk of autism. Caught your attention yet? I hope it does. Even though the study states its results can’t be directly interpreted to paint chemicals causing autism, there are other studies that have fallen in line with this same interpretation.

If you recently got a new workspace, then you are also likely to be exposed to these harmful chemicals if you have a new paint job done.

Now that it’s all clear that paint chemicals can in indeed be harmful to your health, one can’t help but think of what could be done to prevent such occurrence. Well, your answer is to use paints that contain little to no volatile organic compounds (VOCs).

Having a home or office space that’s less likely to kill you seems more than a reasonable view if you ask anyone and considering you wouldn’t have to strain on your credit card to do so, it is a great bargain that should be considered.

link to The Four Best Eco-Friendly Paint Brushes
There is a myriad of different paint brushes on the market today. However, the environment of planet Earth pays the price for our beautification efforts as every year, millions of traditional paint brushes are known to end up in landfills around the world. This waste causes damage to the environment because synthetic paintbrushes take over […]
Continue Reading
link to How to Choose Paint for Ceiling Tile and How to Apply?
Painting a ceiling can be intimidating. Especially when you are at the hardware store trying to pick out the right paint, brushes, and other supplies. Then you get home, and it’s time to paint, but you have no idea where to begin. Not to worry, I’m here to help. How to choose paint for ceiling […]
Continue Reading

Hello, we're the Garrys. We discovered eco paint decades ago and now we're sharing what we know with you.